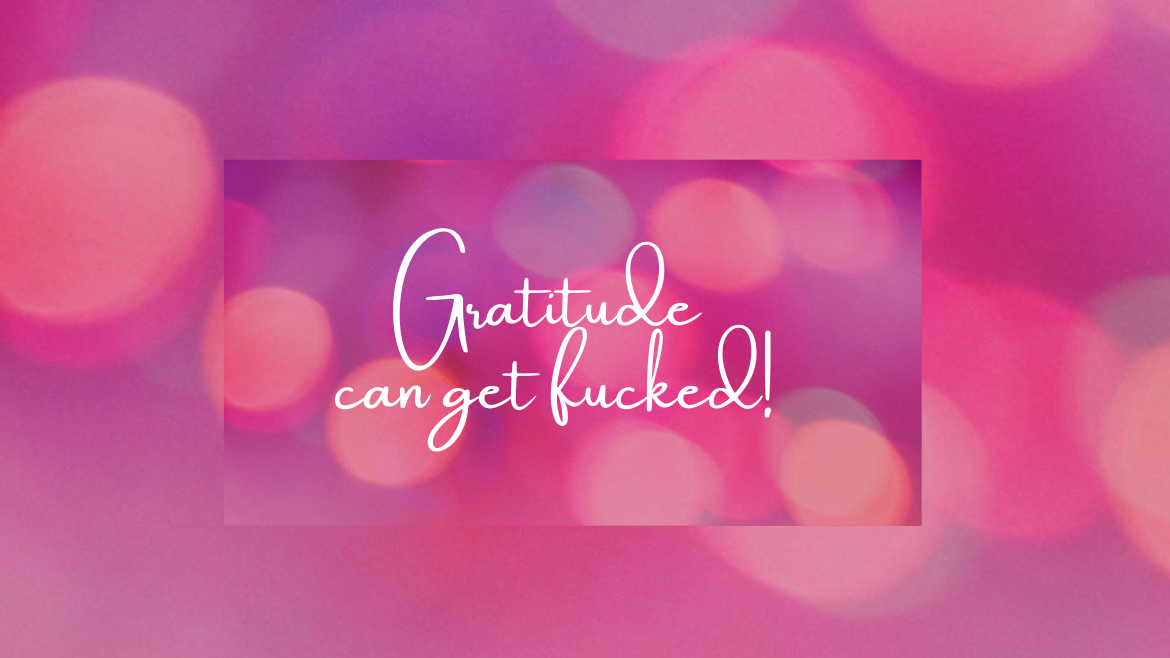 Gratitude can get fucked!

Why should we immediately be grateful for things we didn’t ask for or which don’t mean anything to us? I don’t think we should.

Women have been trained to believe they have to be grateful, so as not to seem ungrateful. It’s been drilled into us not to appear ungracious. But often, what we’re being grateful for is stuff we don’t want or need, and didn’t bloody ask for. I’m as open to the possibility of being given something (gift, opportunity, experience etc) that I didn’t know about or know I’d like, but if it was limited to the good things, that would be one thing.

It’s not. We’re pushed, prodded, poked, provoked, prostituted and all the other things that don’t start with p, and then we’re expected to be grateful for the privilege. No, not on my watch.

It’s this ingrained attitude that makes my job difficult, to open the eyes of women and teach them to set their own standards and boundaries for themselves. Many have never known that they could even do that, because they’ve been living the values of their parents or older siblings.

By the time I come along, it’s still an uphill battle, because so many women have been assaulted, raped, abused in many ways (not always sexually) and then demeaned into thinking they should have liked it, or at least been grateful for the attention. “Beggars can’t be choosers, and you’re not getting any younger.” Are you fucking right? Assault is assault, at any age, and no, she does not have to be grateful for her boss feeling her up while she’s at work because, “ugly ducklings like you need to take what you can get.” I’ll say it again, fuck that.

Some of these women don’t even know that they’ve been being abused, because the teaching has gone so deep that they think all attention is good, whatever happens is fine, it’s their role to submit, or be the plaything, or do whatever their boss says, and don’t question anything. Some women won’t even listen to other women, and will only hear men talking, even when the same words have been said. Some will defend men to women, despite women stating the unspeakable acts they’ve experienced at the hands of men. It didn’t happen, or wasn’t wrong, they’ll find a way to make it okay for the man to have done and the woman to have gone through. It’s hard to fathom, and even some of what I just wrote doesn’t compute to me, but it’s true, of many women I’ve met.

Men tell me all the time that they’re the ones who are hard up for sex and that women can get it anywhere. Er, yeah, they can, if they lower their standards a million per cent. And then what, should they be happy or grateful for you having put your end in and pumped and sweated for a couple of minutes? Yeah, no thanks. And then, some of those guys who don’t care about our standards take advantage anyway. Yes, they’re called rapists, no, they’re not all in jail. Many haven’t even been charged and are continuing along their merry way, repeating their behaviour.

Some of that is our fault, because we’ve been told to be grateful and accept the come ons even when we didn’t want them. The rape isn’t our fault, but because, in our younger days, we didn’t know we could say no, stand up for ourselves, and make demands for ourselves about what was okay and what wasn’t, some men have learned to do what they want to us. And, by the way, I say “our fault” but I’m really referring to the lack of education in our younger days, the lack of which means we didn’t learn how to be empowered and emboldened. But, one leads to the other, leads to the other, and now, as adult women, we’re trying to figure this stuff out, and it’s not too late for our futures, but it sure is too late for what we’ve already gone through- which we never should’ve had to experience.

On MAFS, this season, we have Olivia acting like Holly needs to be grateful for having Andrew around. But from what we’ve been shown, HE’s talking to her deplorably, and HE’s the narcissist, not her. Why should she sit next to the man who’s been abusing her? Because she needs to be fucking grateful? NO!! There’s no doubt they’re on different wavelengths, but that doesn’t mean she needs to be grateful for him treating her like shit- which is all we’ve been shown.

It’s the same shit attitude that people had about Grace Tame. Many have said she should’ve been nice and polite to the PM at the pre Australia Day event at the Lodge. But Scomo is an arsehole. He’s shown little to no support for sexual assault victims, including those who became such within parliamentary walls, while he was in office. Why should she be polite and grateful? Fuck that. The poor woman, by virtue of being named Australian of the Year, had to relive her trauma repeatedly for the 365 days she held the title. Oh wait, is she supposed to be grateful for that too? I hardly imagine it was cathartic for her, and rather, I expect she’ll be increasing whatever mental health support she has in place.

To have so many of the Australian public turn on her is indicative of the types of women I mentioned above, those who were taught to accept whatever they’re given, smile, grin and bear it, and of course, lie back and think of England.

Everything’s a lesson but that doesn’t mean it’s always something to be grateful for in the moment.

I say be choosey about what you’re grateful for, learn your lessons on your own time, rather than on how your parents raised you in another time and era where they were also living on inherited beliefs.

And, also, it’s no one’s place to expect gratitude from someone. If you feel it, great, if it takes you some time to reach that point, that’s okay. But demanding someone else, or yourself feel it, before it’s time, helps absolutely nobody. 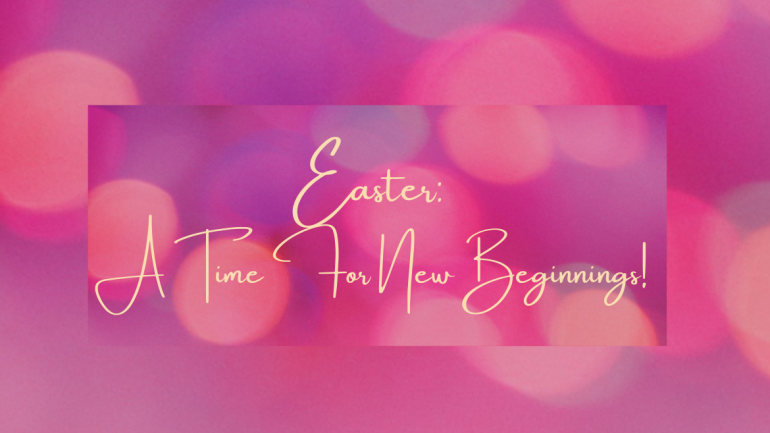 Easter: a Time for New Beginnings! 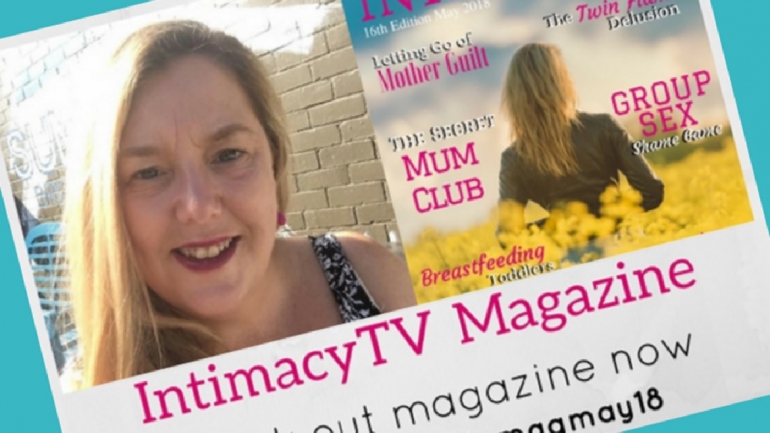 The Mum Club~ The Article I HAD to Write